The forests of West Vancouver originated some 10,000 years ago after the retreat of the last ice age.

Since that time there have been continuous periods of climate change with consequent evolution of vegetation and forests. During this time too, and especially in the period between 1,200 years and 2,400 years ago, there was an extended period of drier and warmer summers which may well have resulted in a greater incidence of wild fires in the West Vancouver forests.

This evolutionary process gave the west coast of British Columbia the great rain forests of today with their variety, not only of large trees, but also of different vegetation and wildlife. British Columbia became known for its huge trees, especially Douglas-fir which supplied masts for the British navy and high grade lumber for its fleet. Very soon a large market developed for cedar shingles from the large redcedar trees, which were plentiful in West Vancouver’s mountain stands. These trees were right on top of a well protected harbour and so it was natural and most economical to develop here and use these stands.

No wonder that the current history of West Vancouver began with the establishment of logging and sawmills in the late 1800s, recognizing that native people had been harvesting cedar for canoes and fishing all along West Vancouver’s coast since very early times. Due to the new and burgeoning interest in harvesting timber, the government of the day issued some of its earliest timber leases in 1870. Although many of these were along the coast, several lay within the area now known as West Vancouver.

Sawmills were quickly established at the mouth of the Capilano River, near the mouth of Rodgers Creek, at what is now Sharon Drive, and in Horseshoe Bay. Later, sawmills were set up further up the mountain from which timber could be flumed down to the coast, or sent by early railways to the waiting sawmills at the river mouths. Although horse logging was the initial form of transport, tractors, donkeys and flumes all played a part in moving the timber to water. The evidence of this logging can be seen in West Vancouver today in the remains of sawmills and the many skid trails that are still used by the public.

Although the time of the early sawmills drew to a close with the Great Depression, logging continued in many parts of West Vancouver. In the area around the Old Growth Conservancy, there was a logging and sawmill operated by the Cypress Lumber Company in 1918 just west of the last switchback at Rodgers Creek. This operation also serviced a flume to Sharon Drive and the mill at the mouth of Rodgers Creek.

Most of the operations in the Old Growth Conservancy came at a later date with the earliest being the sawmill and logging north west of Parking Lot 5 in the 1940s. This site can now only be identified by an opening in the canopy created by the sawmill operation. There were other logging operations immediately south of the southwest corner of the Conservancy in the early 1960s, but these were primarily selective logging operations for high grade cedar lumber and cedar shakes. There has also been what is called “cherry picking” of desirable species within the Conservancy from time to time. There is now little evidence of these operations other than differences in the canopy of the remaining stands, some stumps, and skid trails that have provided openings for shrubs and deciduous trees.

However, there have been a number of logging and fire events which have threatened the Conservancy, and which have isolated it as a remnant old-growth stand of Western hemlock and Western redcedar with a few Cypress (Yellow cedar) and Mountain hemlock. The southern boundary of the Conservancy is bounded by a young stand of Amabilis fir and Western hemlock which originated from a fire in the 1920s. On the northwest boundary of the Conservancy BC Hydro’s right of way makes a cleared swath along the boundary, and to the west of the right-of-way the slopes of Cypress Creek were harvested several years ago.

With all the logging operations that have been carried out in and around the Conservancy it is fortuitous that the Conservancy remains as intact and relatively pristine as it is. This is truly a unique gem of “old-growth” redcedar and western hemlock surrounded by disturbed areas of rights-of-way, logging and fire history.

In 1990 there was a proposal before West Vancouver Council to enter into a 50 year lease with a golf course developer to lease the whole 360 acre plateau for a 27 hole golf course on the site. The proposed golf course included the entire area of old-growth forest triggering a public controversy. The proposal was later modified to protect only 22 acres of old growth. Activists were able to force a referendum and the plan was defeated by a 57% No vote. The area was later dedicated as park by referendum with 86% support.

The full story is available in The Battle To Save Hollyburn’s Hidden Giants. 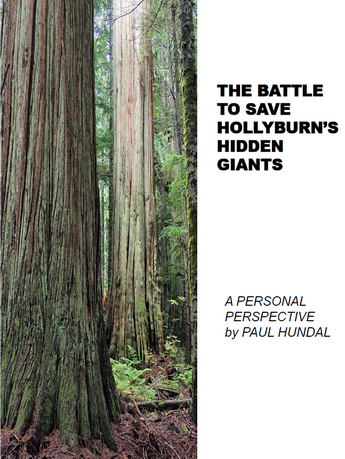